Highlights From Java One 2012

Highlights From Java One 2012

When my talks were first accepted for Java One 2012, I never imagined I would feel like this at the end of the week. Currently, I'm a mixture of so burnt out I can barely walk yet so full of adrenaline I don't want to sleep. As a technologist this week has been the highlight of my career. This post will detail a few of the highlights of the week for me.


Keynote and Lunch with James Gosling

If someone had told me I'd be sat having lunch with James Gosling after participating in the Java One community keynote I would have branded them insane. However, that's exactly what happened today. With my friends in the London Java Community we had a panel session discussing a flag ship initiative we have been working on known as Adopt-a-JSR. The keynote was so far from corporate it was refreshing, it was all about community for the community. 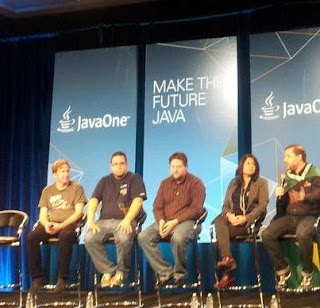 We saw key technical companies participate in the initial panel, us and then a crazy robot chasing down Oracle executive Georges Saab on stage. Then something special happened, James Gosling entered the stage. He was talking about his new development at Liquid Robotics. The best part about his appearance was James was back amongst a community of developers that have a high degree of respect for him and his work with Java. I found his presentation a highlight of innovation that is ongoing in the industry. After the keynote I headed over to Stephen Chin's Java Desktop lunch. We were sat at the same table as James and discussed details of the UI that he had built and demonstrated during the keynote and discussed some of the problems that data heavy systems would cause web based applications. What a great note to end Java One on.

Java FX has been technically the most exciting product of Java One for me. It really starts to represent the revival of Java on the desktop. Although Swing has lived on over the last few years, how many people have really wanted to do this? Java FX simplifies a developer's ability to rapidly create flexible and maintainable user interfaces. Scene Builder also provides an abstraction away from code, so you can now have a design team that builds the basic CSS and component layout and the development team adds the functionality on top.

At Java One myself and Ben Evans presented our toy project visualising garbage collection in Java FX.   One other highlight of the week was when I met Jim Weaver near the exhibition hall. He asked me if I'd like to come over to watch him give a demo. Within about 15 minutes I was stood at the front of the demo grounds giving a presentation on I'm new to Java FX and this is what I've built. Thanks Jim! That said it was great fun and all the Java FX team are really fun people to hang around with. 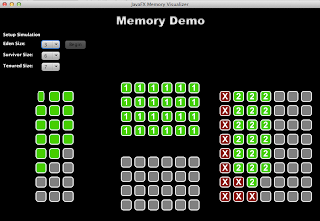 My challenge for our next JUG meeting is to get a Java FX example running on the Raspberry Pi. Hopefully the Pi will arrive before then, if not I'm really looking forward to sharing everything else about Java FX back in the London Java Community.

Adopt-a-JSR is a global initiative that was kicked off in London to help make the JCP (Java Community Process) relevant to Java developers and increase their participation. Adaptavist's Dan Hardiker had the following to say about the project:

Jax - What in the development world (project or otherwise) is really interesting you at the moment?

Dan - The Adopt-a-JSR programme ran by our own LJC, is one of the most important initiatives I've seen in a long time. It puts developers back in the driving seats helping to steer decisions on important areas of the language they live and breathe.

From attending Java One it was clear to see that although we have managed to reach senior members of the community there are still many members of the Java community that are not aware of the program or the aims. A second interesting point was that many of the developers attending our sessions are not members of Java User Groups. In order to address these points we are going to look at how we can be wider reaching to developers that are not members of JUGs. Recording sessions and broadcasting them to the wider community is going to be part of the strategy we look at to address this.

In the background to Java One we have been working hard with Oracle and Stephen Colebourne to address the final design decision of JSR-310. A lot of hard work is going into this JSR behind the scenes and at the end of some fairly heated debates we are looking to be on track for Java 8. If you're reading this and you still want to help, we are making a push for people to help us with the following:

In our continued efforts to evaluate and improve the Threeten Date/Time API for Java 8 we were discussing the effort of porting code from existing APIs. Does anyone have open source examples of code which they wrote against the existing java.util.Date or Calendar that you felt was overly complicated? I have some code myself, but I'd really like to hear from you if you have stuff that's open source and available for hacking on.

If you can help please feel free to drop me a tweet @JavaJimLondon.

One final point that really excites me is robots! There has been a taster of Java running on embedded hardware, we've also seen some really cool demonstrations of Java FX running on embedded hardware and a Raspberry Pi. This is what I'm going to be playing with over the next few months, along with Java FX to try push the bounds of what is possible.

A big thanks has to go out to Sharat for organising a fantastic Java One, this year really had a community feel about it. Thanks to all the speakers and the content committee, it's been awesome!
Posted by Unknown at 14:14